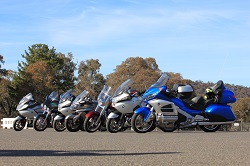 On one of the coldest July mornings in 40 years, a group of hardy riders clad in motorbike leathers gathered on the outskirts of Queanbeyan, NSW.

Sustained by a hearty cooked breakfast at the headquarters of the Sutton Road Diver Training Centre, the small group of current and former AFP members, including NSW Police braved the below zero temperatures outside the nation’s capital for a worthy cause. It was the second, and last, training ride before embarking on the inaugural Ride for Police Legacy along the iconic Route 66 in the USA in August.

Ride organiser and AFP Legacy board member Sergeant Louise McGregor said the seven riders and their pillion passengers were taking the opportunity with five weeks left before departure to get to know each other again, many renewing old friendships, and some making new acquaintances.

“Importantly, today’s activity allows the riders to refresh their bike fine-motor skills and apply them to the other side of the highway,” Lou said.

For many of the participants, driving on the opposite of the road is not unfamiliar having driven cars in the US during previous visits, but navigating a large touring motorbike on busy and bustling city streets at low speed, on the ‘wrong side of the road’, can be a challenge.

The official tour will commence on 10 August in Chicago with a memorial service and wreath-laying ceremony in the ‘windy city’ with the Chicago Police Department. The group of 39 will head off on the first leg of the iconic journey via a lazy 176 miles (283kms) to Springfield, Illinois on 12 August. The Australian Consul-General in Chicago will ride out from Chicago with the group for the first day.

Riding some 3,940kms through eight states, across three time zones in 11 days, there will be 19 bikes and riders, some with pillion passengers, amply supported by a road crew traveling in SUVs and of course an obligatory convertible Mustang!

The tour is the biggest fundraiser in AFP Legacy history with organisers hoping to exceed $70,000 for police charities in Australia. The roadshow aims to draws crowds across small-town America engaging with local media along the way and blogging on social media to keep interest high.

“I’ve had word that welcome BBQs have been organised by some communities in anticipation of our arrival. The good-will towards Australians and police generally is going to make this trip a once-in-lifetime experience,” Lou said.

The ride will conclude in California under police escort through Hollywood, Beverly Hills and Pacific Palisades to finish at the iconic Santa Monica Pier.

Please support Route 66 fundraising efforts by making a donation to AFP Police Legacy at www.gofundraise.com.au Donations over $2 are tax deductible.

Better yet, given it’s the start of the new financial year, support AFP Legacy through ‘workplace giving’. These deductions are simple to organise through Insight! By contributing just a $5 a fortnight through a tax deductible, salary donation you can support families of all AFP employees during their time of greatest need – the death of a member. It’s only the equivalent of one purchased coffee, but it can make such a difference. 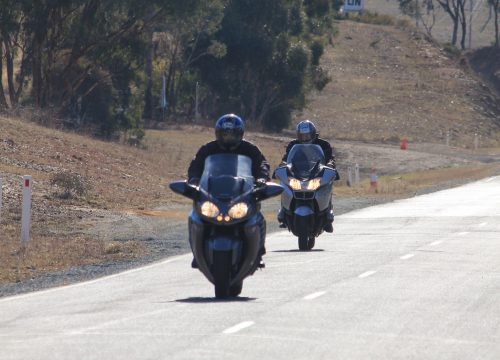